Communicating with aliens could get pretty tricky if they don't know any Earth languages.  And by the same token, it can be very hard to communicate with other people who don't know any languages we know.  Sometimes, we might not even know what language or languages the people near us know.  This gave me an idea: What if there were an app that would detect the language most chiefly spoken in proximity to your location?  I don't have nearly the skill-set necessary to execute on this idea, but I'd like to lay it out here. 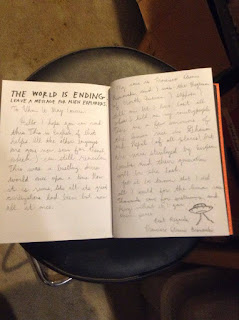 Above you can see a photo of an exercise from the Steal Like An Artist Journal.  As I wrote at the beginning, lack of language knowledge could ultimately render such a letter moot.  Unless the aliens learned how to read English or designed some sort of program to translate for them, they wouldn't be able to read it.

Say that you're backpacking through Europe and you stumble into Switzerland.  Well, Switzerland has a lot of language diversity.  You could always Google the names of towns to figure out what language they spoke most chiefly, but in certain places, that language might vary depending upon the neighborhood.  Even in the U.S., it can be unclear in certain cases whether you're in a predominantly English-speaking or predominantly Spanish-speaking "part of town," at least at first.  If you want to have the highest chance possible of communicating with the people around you in these cases, you'll want this theoretical app (once it, theoretically, exists).

This app would also work with dialect.  Type in something you would like to say in your native or favorite language, and the app will use GIS systems and databases (or something) to determine what language and dialect is utilized most often within, say, half a square mile of your location.  The app would then translate what you type in into that language and dialect and help you pronounce it.  You could also just point your talking phone at someone, but that might be rude to some people.  This app could also offer some culture tips to help you avoid unwitting offense to the local populace.

With this app (Working Title: This App), communicating with people in your immediate proximity just got/will get/could plausibly get easier.
Posted by Patrick Stahl at 11:06 AM