Extra, Extra, Meme All About It

Throughout this post are memes that I created by taking an image and a bit of text from the #RemixUPJ tag and putting them together. 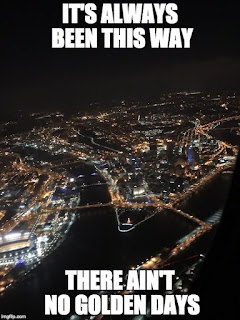 Remixing/"uncreative production" is a fun and interesting way to be creatively productive (as oxymoronic as that may sound).  By taking material developed by another artist and repurposing it, you can give new life and meaning to old art.  Alternatively, you can turn something that wasn't originally thought of as "art" into something more traditionally (at least in a contemporary sense) "artistic." 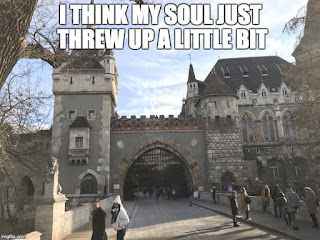 Originality is a complex question in the arts.  When you use a trope in a creative work, can it still be original?  What if you based a new work off of one specific old work or a small subset of old works?  More controversially, what if you take someone else's content and reuse it in a different manner?  In the Digital Age, taking content is often very easy, but it doesn't need to become a pirate's game.  If a work is repurposed effectively, its stolen material broken down into raw components to be rerefined, it can become quite legitimate.  It may or may not be legal, but it may very well be valuable.  The memes we made took inert chunks of text and interesting images and lassoed them together to make new miniature narratives that ask questions, tell stories, or make comments on human topics.  Or they might just be funny.  That can be fine too.

This next meme below was made by @ashleypgh.  She took one of Professor Landrigan's images and combined it with one of my bits of found text to make an interesting meme.  It invokes the edges of a story without giving any details beyond what can be seen in the image.  I think it's pretty cool. 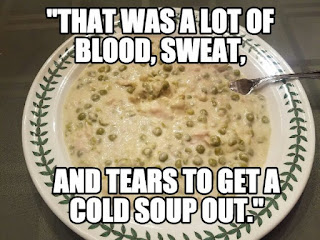 I took both inspiration and content from my peers for my memes.  They provided the raw materials, and those raw materials carried with them some inherent values.  The second image from the top of this post, for instance, has a certain level of grandeur to it.  I decided to pair it with "I think my soul just threw up a little bit" (actually one of my own text-bites) to make a joke.  The meme could've gone a different direction with a message like #VacationGoals, but it chose to be over-the-top and shocking instead. 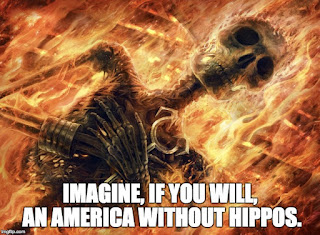 To maintain a sense of originality with my memes, I tried to take images and texts that don't immediately seem to fit together and turn them into memes.  I had to come up with original ideas that I hoped would be born out of the juxtaposition of certain images and words.  They might not be perfectly original as concepts, but they at least take old ideas (like the phrase "mind blown") and give them a fresh face (a skeleton on fire).  Placed beneath the phrase "Imagine, if you will, an America without hippos," the image should invoke a strange response in a viewer whereupon they are momentarily dazzled by the idea of a hippo-less America, despite the fact that there are few places in America that hippos have any reason to be at, if any.  Then a neat little mental conversation can start in the viewer's brain.  What fun!
Posted by Patrick Stahl at 12:31 AM