I decided to use a Facebook page for my location-based narrative, which struck it down a peg for originality but allowed it to be both cohesive and open for exploration.  The nature of Facebook timelines is such that the pieces are a bit scattered, which is an accurate representation of the space.  My experiences in Biddle 223 are scattered throughout time, and it's rare for everyone I see there regularly to be there at the same time.  There are four people I see most often in the second-floor Biddle meeting room, and those four people got little Humans of New York-style photos with captions.  With digital technology, I was able to assemble a group of photos and bunches of text that represent my typical interactions in Biddle 223 over a short span of time.  The room cannot be both empty and full at the same time in physical space, but it can be in the digital. 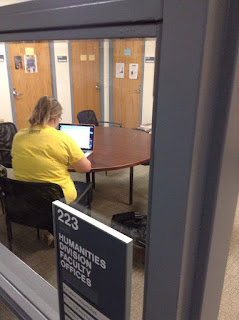 I chose Biddle 223 for my project because I've been spending a lot of time there the last three semesters.  It's where I hang out with my French friends, my best friends on campus.  I made a few acquaintances before meeting the three students pictured in my narrative back in Intermediate French I, but I've definitely spoken with these three the most since then.  There are a few other people who I regularly spend time with in Biddle 223, but these three are there the most.  And as for the pictured professor, I'm in his office at least once a week.  He has great office hours.  I've learned from the feedback I received in class that there are many other students who have come to love this room on campus during their time at UPJ.  If I were to expand this project for my final project in the class, I would expand the project beyond simply my experience with the room, including perspectives from other students, as well as more photos and captions.  The project as it stands represents Biddle 223 when it is empty and when it is subject to my presence, but I think the meaning of the room is deeper than that. This page ought to represent everyone who has had the privilege of passing through Biddle 223 at UPJ.
Posted by Patrick Stahl at 7:34 PM