The Merriam-Webster definition of the word "meme" is: "an idea, behavior, or style that spreads from person to person within a culture."  Most of the time, memes are presented as images overlaid with words; however, this need not be the case.  The idea that I am about to present borders on memehood.  The individual pieces may not all be memes, but some of them would convey parcels of culture, and some could potentially enter into popular culture themselves.  Below is the exercise I was inspired by: 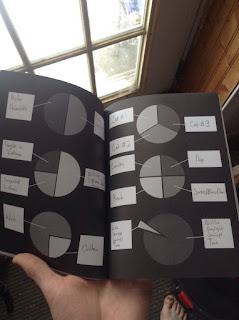 This exercise was left undefined.  There are pie charts that are wont for labels.  So I labeled them.  I tried to take them and turn them into charts of frequency.  The proportions are approximate.  Then the one broken to thirds forced my hand.  I've cut cat food into various pieces, but when I first started it was always two cans, each split into thirds.

Check out this cool pie chart that, coincidentally, exemplifies my idea!

I think it could be interesting to start a new sort of "sorta meme" site.  Have a "Sorta Pie Meme" generator that allowed users to break a pie into as many pieces as they wanted (up to maybe ten), each in whatever size they would like (with the minimum being a one-pixel line).  Different sorts of ideas could be conveyed in this manner than can be conveyed by standard memes.  I don't have the technical know-how to execute on this idea right now, but it's possible that I will some day.  I sorta like it.