Comic strips are really hard to make as a one-person army.  One has to be able to draw, script, and possibly color.  There are some popular comic strips produced by more than one person (and possibly more than I know of).  Why not try to start a new one?  Or even if making comic strips is just a hobby you wish to pursue, but you know that you're only adept at one of the necessary skills, why not use Share the Squares to crowd-produce your comics?  Well, there's an easy answer: Share the Squares doesn't exist yet.  But maybe it will some day. 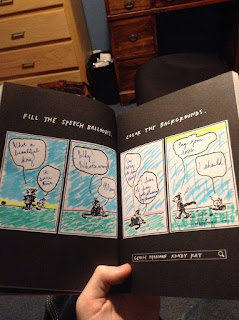 With Share the Squares, you can choose to either start a project with a script or a set of drawn panels.  You can also choose to work on an existing project, drawing panels to fit a script, writing a script to fit some panels, or adding color to give a strip some extra dimension.  Pick your poison and play along.

I can't say that I'm particularly good at any of the phases of comic strip development, but I appreciate the art, and if I ever have the skills necessary to produce Share the Squares, I just might.  In the photo above, you'll see my attempt to give a script and some color to a drawn set of panels from an existing comic.

Let the comics roll, in their lines and in their times.
Posted by Patrick Stahl at 11:15 AM