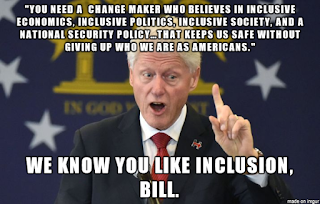 This quote from former President Bill Clinton, which I found on hillaryspeeches.com ("Bill Clinton Campaigns for Hillary in SC and GA"; photo also from that post), has multiple "meaningless words" and phrases.

"Change maker" is the first meaningless phrase.  Outside of politics, there might be some shred of meaning for the term, but within politics the phrase is hollow.  Some politicians make more changes than others, sure, but everyone makes changes.  Even the most classical conservatives make changes.  "Change maker" is a buzzphrase, stripped of its denotation until all that is left is a positive connotation for most.

There are three instances of "inclusion" in this quote, and zero of them have meaning.  When you see  the word "inclusive," you may get a warm feeling, but that's all there is to the word as it relates to the words "economics," "politics," and "society."  There are policies that could fall under the category of "inclusive," but as Mr. Clinton used the word, there is buzz without sting.

"Safe" falls toward being a meaningless word as well.  It can mean many things.  No policy can satisfy "safety" by all of its definitions.  In context one can assume that the word is used to describe a state in which terrorism is infrequent, so there is some meaning to be found here.

The final "meaningless word" Bill Clinton used in this quote is "Americans," specifically after the phrase "who we are as."  There isn't a unified idea of what it means to be an American.  Beyond that, Mr. Clinton never attempts to narrow what being an American means.  He simply says that his wife would "[keep] us safe without giving up who we are as Americans."

Virtually no part of this sentence has any meaning whatsoever.  It is political up to the lip of the jar.  If anything, Mr. Clinton is saying that his wife is a liberal.  Well, so is her opponent.  There isn't really a way to fix Mr. Clinton's statement.  Add meaning by actually saying something.
Posted by Patrick Stahl at 1:31 AM