Battle of the Bands + Profit

This week's prompt in my uncreative journal is about starting a tipping war by putting out two tip jars and having people "vote" with their change.  While I could get digital tip jars without a whole lot of strife, I'm more interested in social media exposure right now.  (Well, unless you wanna drop some Benjamins in the tip jar.)  I propose a battle of the bands.  Except both bands are me.  But playing covers. 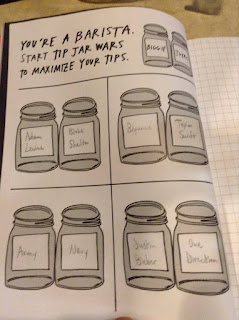 From my four pairs of jars here, I picked musical artists for three pairs.  The Army v. Navy idea may or may not translate to the digital for this theoretical project.  I could easily record covers of one song from each of these pairs of artists/bands, tweet them out right after the other, and have people vote for their favorite by retweeting one or the other.  Or both, if they really can't choose.  This would increase incentive to retweet links to my videos, boosting traffic to both my Twitter page and my YouTube channel.

As a little precursor to this project (if I do indeed pursue it), comment below which of the following songs you prefer: