You probably need to read the whole novel to fully appreciate one of my two favorite quotes from Robert A. Heinlein's YA science-fic Citizen of the Galaxy, but you don't need to have read any particular novel to join in the collaborative exercise that I am about to propose. 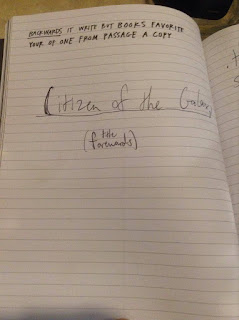 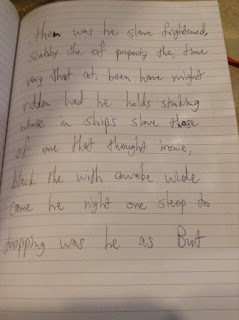 All you need for this collab is a group of people and a Google Doc.  The more people who join in, the better.  Here is the plan: type out a sentence from some work of fiction (it could be a favorite quote, or it could be a random sentence, and it should be running forwards), have the next person add a sentence in front of your sentence, have someone else add a sentence in front of that sentence...you catch my drift, non?  By the end, you should have a bunch of cool sentences, with perhaps a few mundane or weird sentence mixed in.

Now I'm going to do a little variation on this exercise.  I'm going to take five books on my bookshelf and use random sentences to construct a six-sentence narrative, with the sentence I used for my prompt (running forwards) as the base.  It won't be a collaborative exercise, but it should give an idea of what such an exercise may yield.

Sophie had half a mind to stump straight out of the castle again, and away down the drive.  "Tell me when it's over," Thalia said.  Even in the darkness she could see the anger blazing in those eyes, feel them pierce her like two jagged shards of glass.  There the great beeches came right down to the bank, till their feet were in the stream.  "I can get out, and I can get help."  But as he was dropping to sleep one night he came wide awake with the black, ironic thought that one of those slave ships in whose stinking holds he had ridden might have been, at that very time, the property of the scabby, frightened slave he was then.

(From beginning to end: Howl's Moving Castle, The Titan's Curse, The Paper Magician, The Hobbit, Mr. Monster, Citizen of the Galaxy.)

This looks like it could be fun, right?  I hope so.  Using random sentences may actually be the most enjoyable method for this exercise, but I'll allow you to experiment with it both ways, if you wish.
Posted by Patrick Stahl at 10:48 AM