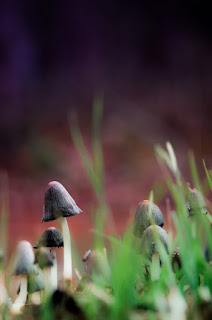 Edward stooped down to the cool, wet grass and examined the patch of fungi his elder son had run home to tell him about.  They appeared to be the correct shape: thin stalk, tall head with a moderate brim.  The regal purple of the heads looked poised against the glowing white of the stalks.  Not the most potent, Edward decided, but they would work.
He placed the mushrooms in a sack and jogged back toward his home.  When he returned, his sons were already putting on their armor.  He smiled.
“The water is boiling,” said Edward’s wife from inside the house.
Edward dumped the mushrooms into the pot straight from his sack.  “How long?” he asked his daughter, who was sharpening his sword.
“A quarter hour,” she replied.  She handed him his padded leather gloves.
“Thank you, Mara.”  He slipped them on and flexed his fingers.
Jonathan, the elder son, stepped through the threshold.  “Father, Michael is a little nervous.  He can’t hold his axe steady.”
“I will talk to him, thank you.  I know you just honed it, but give your sword a few extra swipes with the whetstone.”  Edward strode out the door and put a hand on the shoulder of his shaking younger son.
“What if they kill you, Father?”
Edward chuckled.  “Oh, is that your worry, boy?”
“There are ten of them and only three of us.  And you aren’t even wearing armor.”
“You’re old enough now, I suppose.”
“For what?”
Edward opened his shirt to show his chest.  A dozen long, thick scars covered the surface.
“Father…”  Michael went pale.  “Are you an Unbreakable?”
“A more ancient Order, son.  My father wanted me to be an Unbreakable when I was a lad, but Unbreakables cannot have children.  I am an Ironheart, the last in this hill country.  That is why they have come to kill me.  The foreigners fear the Orders more than anything else.”
“Will they fight me, father?”
“Don’t you worry, son.  Hold your axe firm, but do not be afraid.  This battle is mine.  And if I am slain, it is your brother’s.”
“I love you, Father.”  Michael wrapped his powerful young arms around his father’s blessed chest.
“I love you too, son.”
Edward’s wife handed him a wooden bowl.  “Fight hard.”
Edward gave his wife a kiss.  Then he turned away and drank.  A party of men crested a hill near the old tree stump where he had gathered his shrooms.
The world became blood and Edward’s heart became iron.  He growled and his sons joined him in battle.
Posted by Patrick Stahl at 12:03 PM