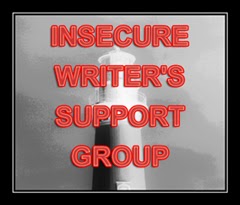 This is my (lucky) seventh post for Alex J. Cavanaugh's Insecure Writer's Support Group.  From Mr. Cavanaugh's blog: "Purpose: To share and encourage.  Writers can express doubts and concerns without fear of appearing foolish or weak.  Those who have been through the fire can offer assistance and guidance.  It's a safe haven for insecure writers of all kinds!"

As the title suggests, I can't help but feel that my blog is losing traction.  Sure, I'm getting more comments than I was early on, but the trickle of new followers has almost ceased.  I've been stuck at 58 for over a month now, possibly a good deal longer.

Part of it is avoiding most blog hops and rarely visiting new blogs, but it still feels like progress is moving sluggishly.  I don't want to get to the point where the only time I get new followers is during April (yes, I am doing the A-to-Z Challenge again this year).

I had my second link posted on inkPageant today, but so far it hasn't helped.  According to Google Analytics, nobody has followed the link.

I won't let this blog fail, in any case, but a new face every once in a while would be very nice to see.
Posted by Patrick Stahl at 8:32 PM