The Glacier of Speculative Fiction 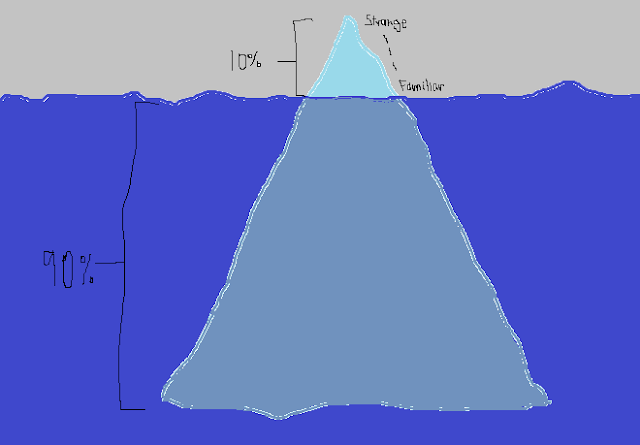 You've probably heard of the two writing principles that I'm combining in my lovely Paint illustration.  The first is The Triangle of the Familiar and the Strange.  The second is a mostly-hidden glacier (of triangular shape, to make this work).

The Triangle of the Familiar and the Strange is a visual rule-of-thumb for descriptions in speculative fiction.  You don't want to include too many fantastical elements in your story, especially early on (I'll talk about learning curves soon).  A purely secondary world leads to mass confusion.  It is the small, constant details that remind you of our own world that keeps things from turning into mindless chaos.  Typically, most varieties of flora and fauna are the same in speculative worlds as they are in ours, with a few new ones thrown in for flavor.  Measurements almost have to be based upon our own, with exceptions based on human anatomy (arm-lengths, paces, literal feet, etc.)  However, a speculative setting is not complete without magic or high-technology, utopias or dystopias.  A good balance is tough to achieve, yet far from impossible.

Only about ten percent of every well-written story makes it onto the page.  The rest lurks beneath the surface, sometimes acting as sub-text, other times as strategically omitted information.  As a writer, you should know some of the glacier's lower region---you don't want to go out like the Titanic.  Good authors hint at the ninety percent of their stories that go unpenned.  If you mention a great warrior who died at a particular milestone in a travelogue, readers will know that a battle probably took place there, an irrelevant but satisfying detail.  Some authors take years developing the ninety percent you don't see, most notably J.R.R. Tolkien.  Figuring out too much of it manifests as a case of World-Builders' Disease.  While The Triangle of the Strange and Familiar has a fairly consistent ratio across speculative fiction, the ratio of strange to familiar in the lower ninety percent varies greatly depending upon the story.

These two writing principles work hand-in-hand to form The Glacier of Speculative Fiction.
Posted by Patrick Stahl at 10:22 PM

Email ThisBlogThis!Share to TwitterShare to FacebookShare to Pinterest
Labels: Writing